↓
By Jeanne Mease
Why were German prisoners of war here? 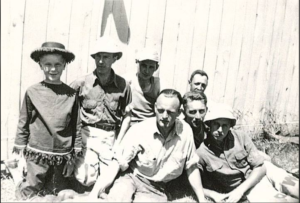 Photo above with German PWs was taken east of Steiners Corners near Mishicot. The young boy on the left is Lester Koeppel whose family lived near this site where Lakeside Packing Company operated four stationary pea viners.

POWs on European soil would tie up thousands of Allied troops to guard them. Troops were needed to fight the war overseas, not guard POWs. The solution was to bring the POWs to the United States in empty returning ships after delivering supplies to the front.

U.S. military leaders looked to Wisconsin as a place to hold German POWs during the war years, because one-third of Wisconsin’s population was of German descent and many first and second-generation families were still speaking their native language at home. So by 1945 Wisconsin housed about 20,000 captured enemy soldiers!
The prisoners were first brought to pre-existing military bases. Nine thousand were held at Camp McCoy near Sparta. Then 13,000 came from Fort Sheridan, Illinois and were sent to 38 “Branch Camps” scattered across Wisconsin. From there they were sent out to work in tucked away rural communities so most of the state’s residents never even knew they were there. It was impossible to keep it entirely secret, especially as the great benefit of having the prisoners, (referred to as “PWs”) was quickly realized.
With the nation’s military-age citizens off to war, the remaining labor force consisted of high school students, housewives and the elderly. A desperate need for help on farms and in canning factories existed. As the agricultural labor shortage grew severe, the new influx of the PWs as potential workers was a golden opportunity for fruit and vegetable growers.
German POWs performed different types of labor, including harvesting crops, working in canning companies, lumbering, and manufacturing. Prisoners were moved around depending on the labor needs in different areas of the state. Most of their work was seasonal agricultural employment. Early in 1945, the government decided to establish Camp Sturgeon Bay as a temporary branch camp. Millions of pounds of cherries had been left on the trees in previous harvest seasons and local canneries lost nearly 30 percent in 1944 alone, due to labor shortages. The PWs saved the 1945 harvest with each man picking about 20 pails a day. In Wisconsin Rapids, prisoners worked in the cranberry industry. In the Appleton area workers were desperately needed for the pea harvest and PWs from Camp Appleton filled the need for workers at the pea viners and in the canning factory. Some prisoners stayed on to weed and can beets. PWs at Camp Plymouth and Camp Sheboygan, worked the fields and canning factories. After the pea harvest, came red beets, carrots, sweet corn, and then the sugar beet harvest in November. The prisoners were not required to work but they sometimes welcomed the activity to cure the boredom while being detained. Instead of pay in cash, they received scrip, which could be spent in the camp canteen. 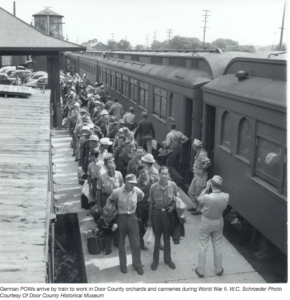 German POWs arrive by train to work in Door County orchards and canneries.

Manitowoc was scheduled to have a branch camp, but there were local objections to housing prisoners at the Manitowoc Fairgrounds, so the 500-600 PWs went to the Chilton Fairgrounds instead. These men would assist the pea canning in Calumet, Brown, and Manitowoc Counties. From Chilton these men would be broken into smaller crews that would go to various sites including Valders, St. Nazianz, Rockwood, Steiners Corners, and Manitowoc. The local press had expressed the reluctance of the community to have prisoners in their midst, but using them was a last resort to prevent the produce from rotting in the fields. With the help of those who worked at Lakeside Packing Company, Manitowoc County’s largest pea crop since 1926, estimated at 4,000 tons, was successfully harvested.

The Facebook post that provided the idea for this story inspired other local folks to comment on their memories. One stated that, “The prisoners worked on my grandparent’s farm and since my grandpa spoke German, he would have beers with them at the end of the day. My dad told me that story years ago.”
Another said, “My grandfather had German POWs working on his farm just north of Two Rivers. My dad said they were sent out each day with a bag lunch, but my grandmother would cook a huge spread for them and invite them into the house. My grandparents spoke German since their parents had come from Germany a generation before. My grandparents did not teach their kids to speak German because they were afraid they would be targeted. The POWs were never a problem. The grandparents said that they were just ‘lonely boys’.”
For one woman, the post brought back many memories. She stated, ”We lived on a farm on South 35th Street in Manitowoc. Across the street to the west of our farm there was a large field that went all the way to the highway. During the war this large piece of land was a vegetable field. It wasn’t just peas but all vegetables. The German prisoners worked the farm and land from 35th Street east to the asylum. (Later known as the mental hospital). As a child we saw the men in the fields. I remember waving to them. Mom said stay away. She spoke German and understood what it was all about. My mother forbade us from going across the road to talk to them. All the men working with hoes and tools were war prisoners. They were there for most of the summer. On occasion they would ask for water. I  never recall a problem. This is a memory from long ago.”
Deborah Eis Rivest posted, “I know my Grandfather Oscar Eis had some German prisoners work on his farm on Highway 147 between Two Rivers and Mishicot.”
The captured soldiers labored side-by-side with their Wisconsin hosts. This familiarity led to many acts of kindness and generosity.  Items desired by prisoners were often donated to them, and extra food would be brought in. One local woman brought coffee and soup or stew to the prisoners at noon.  Most of the prisoners were fairly young.  Although they were under strict orders not to fraternize with civilians, the rules were sometimes overlooked.
Today the state’s POW camps are a mostly forgotten part of Wisconsin history. Civilians were greatly influenced through their personal experiences with Germans throughout the war. Their stories reflect a time when ordinary Wisconsinites forged a kind of separate peace with enemy solders across cultural as well as physical barriers.
The book Stalag Wisconsin is an excellent source for more information.  It is available at the Lester Public Library.  Betty Cowley’s book must have inspired articles that appeared in many Wisconsin newspapers. 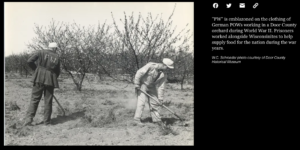 PW is visible on the clothing of two workers in an orchard.