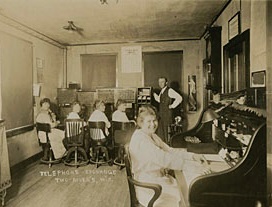 Norma (Nelson/Jones) Lutzke was an operator for the Commonwealth Telephone Company. She graduated from Washington High School in 1943, and started working at Commonwealth shortly after graduation. She worked with the manager, Ed. Weber and linemen like Clarence Oestreich and Maynard Prust. In the office was Erna Grip. The chief operator was Marie Frasch. Fellow operators were Mrs. Roland Broker, Adeline Tolkstorf, nee Lalko, and Betty Willequette.  Evelyne Borusky was also an operator. Norma explained when a light lit up on the board, her job was to plug in the wire for the call to connect.

In the country there were “party lines” which meant at least five families were all connected on the same line. Each residence had a separate code of rings. Roy Engelland said his home was on a party line with 13 other families. Sometimes people would listen in on phone calls that were not their calls. News in the rural areas “traveled fast.” Norma added, “Many times complaints would come in about certain ‘party line’ people talking for long periods of time, so calls could not be made by other families. The operators could do nothing about the situation.”

When Mrs. Ed Hamilton started a hospital nurses-aid program, she chose Norma, Evelyn Borusky and Marie Frasch to be her first volunteers. Norma was in her teens at the time. This was in addition to their jobs at the Commonwealth Telephone Company.  Evelyn kept her uniform to the day she died at 103 years of age.

Norma remembers her phone number was 9933. Her wages were thirty cents an hour for workday, night, weekends, and holidays. Norma is a sister to Jerry and Jerome Nelson. She worked at Commonwealth Telephone Company until she married Preston Jones in 1965. They had four children, Julie Ann, Preston, Gene, and Greg. Her husband, Preston, died when the children were very young. Later, Norma married LeRoy Lutzke.

Norma also remembers waiting for her brother to come home from WWII. She had to connect collect calls from other returning soldiers to their families and finally the day came when she heard, “Long distance, collect call for TR 9933.” She kept the switchboard open so her mom, dad, and Rose Riha would get to hear the call all at once! It was a very happy day when both brothers Gerald and Jerome Nelson returned to their home on 13th Street.