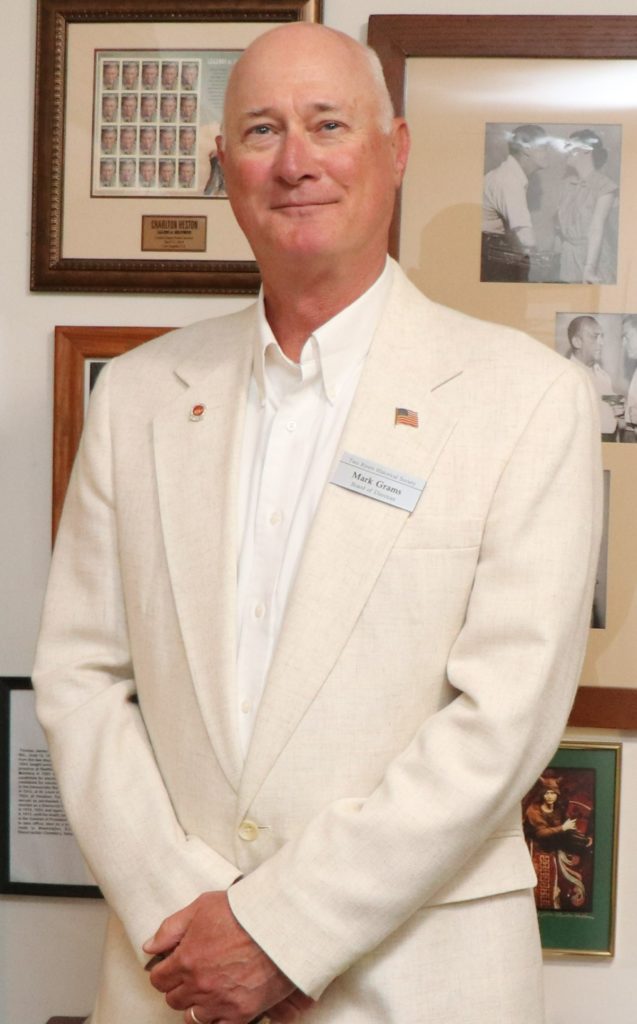 At the April 2022 Quarterly Meeting of the Two Rivers Historical Society, Mark Grams was elected Board President. Mark’s story is an interesting one. He grew up in Watertown, Wisconsin. At age 17, he joined the Marines and served on active duty for 20 years and retired as a Gunnery Sergeant (E7). Being part of the military for so many years, he and his family have lived many places including California, North Carolina, South Carolina, Arizona, Virginia, England, and Okinawa! Mark and his wife of 42 years, Betty, have experienced other parts of the country but chose to live in Two Rivers.

How did Mark and Betty find Two Rivers out of all the places in the world? When Mark was the Dodge County Veterans Service Officer, a flier crossed his desk advertising that military and retired military could rent the Lighthouse Keeper’s house in Sturgeon Bay or Point Beach. They had vacationed in Two Rivers a few times and found Two Rivers to be a beautiful place to live. Lake Michigan and the beach drew them here. Mark said, “It was a neat, clean, safe, low cost of living small community. Two Rivers is well located so it would not take very long to get to larger cities if needed.” They bought a house and have been residents of Two Rivers for the past 15 years.

Mark has had a variety of employment experiences after his military life. He worked in a home for severely cognitively disabled people as a psychology technician. He also was the Veteran Service Officer in Dodge County for 19 years and he retired again. In 2015, he graduated from UW-Whitewater with a political science degree. Since arriving in Two Rivers Mark has been immersed in the city working as a substitute teacher, Community Service Officer for the police department, game day security for the Packers and was recently hired as the part-time Main Street administrative assistant. To have a person with Mark’s life experiences and qualifications as our Board President is a definite plus for the Two Rivers Historical Society.

An interesting connection between Mark and Two Rivers is that his sister was a nun who taught at St. Luke’s School in the 1960s. Her name was Sister Beatrice.

Mark and Betty Grams have two adult children and five grandchildren. We welcome them all to the community!