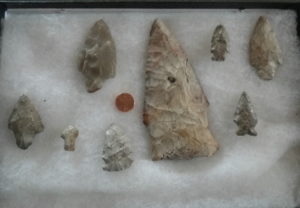 My grandmother Bonnie Zuehl would walk the gravel track of Point Beach road a bit beyond where Port Sandy Bay is now located. There were no trees there, and the sand dunes came right up to where they hiked. She picked up arrowheads and other fragments left behind by the first inhabitants of Two Rivers.

It may be almost impossible to picture this place we call Two Rivers, prior to the arrival of any white man. The first report of an Indian village was in 1779 when the British ship Felicity traveled the coast. A mixed group of Winnebago, Pottawatomi, Menominee, Chippewa and Ottawa resided here. The Indians had no concept of private property so the entire community “owned” the land on which they lived. The Indians were the only residents through the 1830’s prior to the signing of treaties in 1831.

Neshotah (meaning Twin Rivers) was an ideal place to live. The easternmost river was called Mishicott and the Western River was Neshoto. The two met about a block inland from the lake providing a natural trade route. Lake “Michiguma” with its sand bottom and abundance of fish made it ideal for spearing. The land was heavily covered with pine and hemlock and lowland plots provided a place to plant corn.

Mostly Pottawatomi and Ottawa lived along the lakeshore and on the banks of the Neshoto and Mishicott Rivers. The Mishicott River was named for an Ottawa, Chief Mishicott who was probably the most well known. Waumegasako or “The Wampum” was the last head chief. He resided on the south side near the mouth of the Neshoto River in his wigwam, a rounded hut made of a frame of saplings covered with bark. He was honest and just, sometimes acting as a “negotiator” between the Indians and whites. Somehow the settlers turned his name into Mexico. This is how the south side of the Neshoto River came to be known as the Mexico side.

There were many Indians living in close proximity to the whites. H.C. Wilke spoke of wigwams on the east side of the riverbank, on the north side near Baetz’s blacksmith shop and the south side near the “present” coal docks. The Canadians with their fishing shanties were on the east or “French” side and the arriving New Englanders settled  “downtown” between the rivers. Indians were still in the village in 1849 with over 300 participating in a dance that took place near the site of St. John’s Lutheran Church.

As Two Rivers became more populated, the Indians moved farther inland to the forested areas. In fall they moved north to hunt and trap and in spring they returned to make maple syrup, plant corn and trade. On Sunday, August 5, 1850, the Indians had a big celebration in the village. The next day many were sick and six died of what was found to be cholera or “Asiatic Plague.” Six more died the following day. Taking both Indians and whites, within a week, 50 of Two Rivers 300 residents had died. With cholera, smallpox and whiskey, the number of Indians decreased. European immigrants were arriving, and the Indians were forced to other areas or reservations. 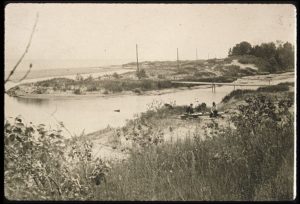 Molash Creek dunes in the 1890s

As the city grew, construction and improvements uncovered several burial sites. Most reminders of the past residents were found on the once highly inhabited nine miles of beach to the north. A wealth of artifacts was found where Molarch Creek (also known as Molash or Molasses Creek) flowed into the lake. Flint chips, arrowheads, fragments of pottery, beads, tools and copper were picked up along the lakeshore. Relics would be uncovered by the shifting sands.

The Indians found Two Rivers to be an ideal place long before the Europeans started arriving. They chose Two Rivers for food, transportation and water. The beaches, fishing, and recreational opportunities are still here. Looking out over Lake Michigan you see the same scene the Indians saw hundreds of years ago.

“What is this you call property? It cannot be the earth, for the land is our mother, nourishing all her children, beasts, birds, fish and all men. The woods, the streams, everything on it belongs to everybody and is for the use of all”. –Massasoit