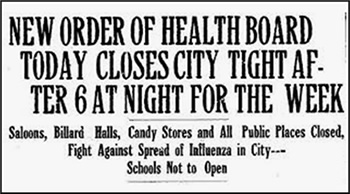 As I write this story, in mid-May 2020, we are about 3-4 months into the Covid-19 outbreak. It’s been quite the eye opening experience for me but not unprecedented in US or Two Rivers history.

In the spring of 1918 a flu-like illness struck the military barracks at Fort Riley Kansas. Over the course of one month, 1000 of the camp’s 26,000 soldiers became sick and about 50 died. The illness struck elsewhere in the United States that spring but quickly died out as summer approached. Come the fall, however, the sickness returned with a vengeance in a much more virulent form and ravaged the US and the rest of the world throughout the fall and into early 1919.

This flu became universally known as the Spanish Flu mainly because Spain was hit particularly hard and it was one of the only European countries not censoring its news coverage. Because WWI was still being fought in Europe, much news was subject to government censure to help bolster morale in Allied countries. Many soldiers of both armies became sick and died from the flu and many American boys carried the more deadly strain back to the states with them as they returned from the war.

Common strategies for fighting the pandemic were similar to what we are experiencing today. Schools, churches, and theaters were closed. Shaking hands was discouraged. The habit of public spitting was also banned.  Washing hands, covering ones mouth when sneezing or coughing and staying home if sick were also recommended. Complicating matters was the fact that there were no known treatments for the disease other than rest and quarantine. Also, many US doctors and health workers had been conscripted into military service because of the world war leaving many patients to fend for themselves.

Two Rivers and Manitowoc were not spared the effects of the illness. On October 8, 1918, the Manitowoc Board of Health ordered school, churches and theaters closed for a period of one week. There had been between 300 and 500 cases of the flu reported in Manitowoc the previous week.  The shutdown was extended for a second week on October 15 as there was no noticeable letup in new flu cases. 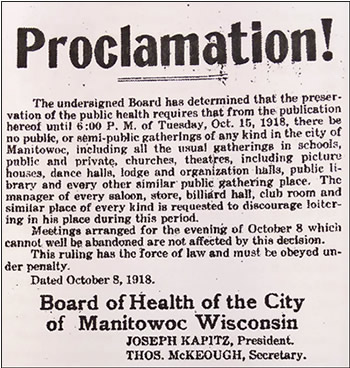 Similar to today’s pandemic situation there was resistance to some of the defense measures. A headline story in the Manitowoc Herald News from October 15, 1918, warned some business operators that they could be prosecuted if they did not comply with orders. The story singled out barber shops, cigar stores and saloons. The pastor of St. James Episcopal Parish in Manitowoc wrote a lengthy defense of having churches remain open. He described the shuttering of churches as being unchristian.  One major difference in the fight was that factories, offices, and many other businesses were allowed to remain open during the lockdown period.

In the November 27th issue of the Herald News there was included two small stories about Two Rivers. The first noted that from this date forward all dances in Two Rivers were banned from taking place. The second was the story of a flu related death. The headline read, “Well Known Two Rivers Man Dies Suddenly”. The man’s name was John Albrecht. He died of complications from the flu. He was 31 years old and employed a Manitowoc Shipyards. Albrecht was the great uncle of my sister-in-law, Nancy Albrecht Mueller. Many of today’s Two Rivers residents may have similar stories.

Gradually, as 1918 drew to a close the, the spread and effects of the flu began to wane. By late spring of 1919 most people and either recovered, developed immunity or sadly had passed away.  Turns out, about 100 Manitowoc County residents died from the flu while in the state itself there were over 8500 total deaths.  Surprisingly, these numbers were much smaller than most other states in the U.S. as Wisconsin had a very strong Department of Health and was very aggressive in its response to the pandemic.

Spanish Flu wasn’t the first pandemic to strike in the U.S. and locally, and Covid 19 will certainly not be the last.  In the next issue, I will investigate Polio, another disease caused by a virus.