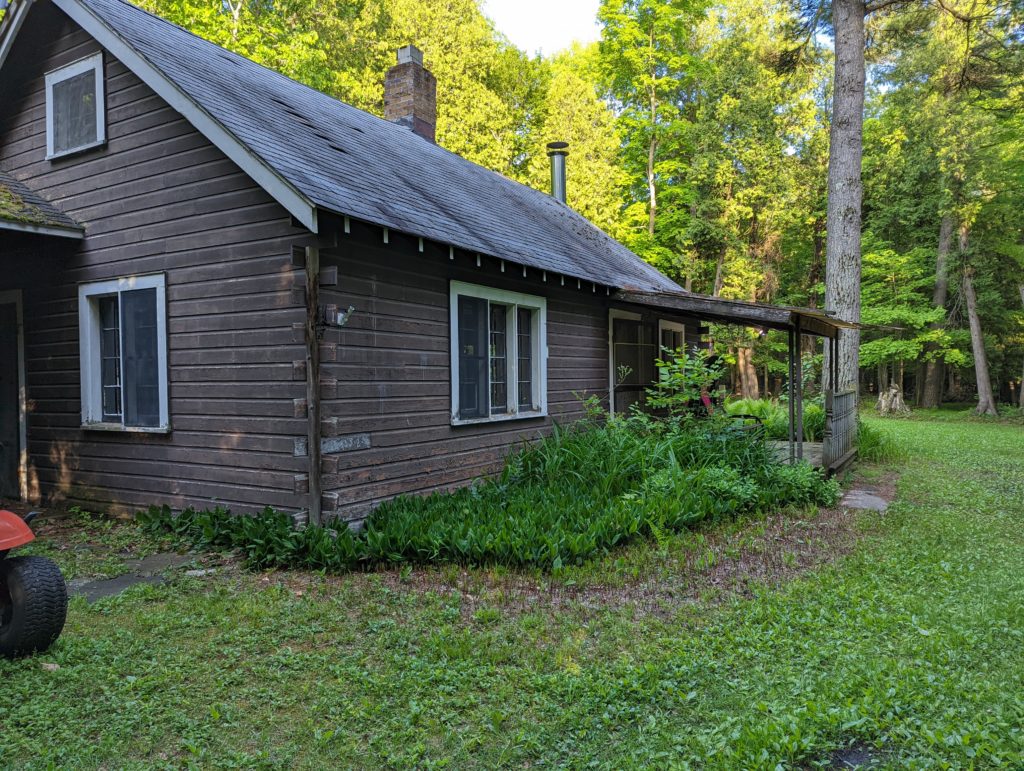 On June 14, 2022, I visited the Zander farmhouse on Maplewood Road north of Two Rivers. Laura (Zander) Stoeger managed to get us all together. Her brother Karl, from Arlington, VA, was in town for a visit. Laura’s cousin Diane (Zander) Christiansen came from Manitowoc with boxes full of photos, articles, scrapbooks, original documents and memorabilia. My visit began by listening to two recordings of Walter Zander speaking about the hostel and tapping of maple syrup. These were digitized from old reel to reel records.

Walter Zander bought 120 acres in 1916. He met his wife-to-be at a barn dance and after their marriage, Esther joined him at the farm. The hostel received its first charter and opened in 1941 with the number of hostelers increasing year by year.

An article from 1953 stated, “The hostel is situated in a grove of majestic old maple trees. In the summer the cool dim aisles beneath their lofty crowns provide the most pleasant place on earth to relax and enjoy being alive. But, early in spring when the snow begins to disappear and life begins to stir again in the giant trees, the forest paths ring with the shouts of the hostelers who have come to open the hosteling season with the annual maple syrup trip.”

Syrup tapping began in 1918 and continued to be a popular attraction at the hostel. The hostel was now equipped to hold 16 guests but couldn’t house all those who wanted to be there for the opening of the maple syrup season. Getting reservations booked early was a way to assure the hostelers they could be part of this short-lived tapping season. Of course, no one can control mother nature. The sap run is dependent on weather conditions. The trees must warm up and the frost needs to come out of the ground. This requires sunny days and freezing nights.

A flyer indicated that the hostel was now open year-round. Accommodations listed rooming for 10 girls and 10 boys. There was a furnished kitchen with cold running water, refrigerator and stove. The building included a large dining room and living room both of which were carpeted. The living room had a fireplace, and the building was heated by natural gas.

In addition to the production of maple syrup, the wooded area was excellent for hiking. The East Twin River flowed nearby providing boating, swimming and fishing. The hostelers could bike to Point Beach. In winter there was ice skating on the river and skiing was available at nearby Hidden Valley.

After Esther’s death in 1967 Walter stated that Esther would want them to keep the hostel going. Esther had taken care of all the writing, answering letters and giving many talks to clubs and organizations. Walter stated his son Ned, and his wife Verna would join him to keep the hostel open. At some point Ned’s brother Paul and his wife Eleanor joined in the operation. Walter’s death in 1973 and new licensing requirements put the continued existence of the hostel in jeopardy. Speaking to a group, Eleanor explained the Wisconsin Department of Public Health now included the hostel under the state classification covering hotels and motels. This would require that costly plumbing and electrical changes would be needed to meet the state code. The last charter found in the boxes was for the 34th season. By 1974 the hostel was shut down.

Diane Christiansen, daughter of Paul and Eleanor Zander, offered to show me around the property. The drive started with a ride the way my mother would have ridden her bicycle to the hostel in 1943. Next, we went to “the cabin” which was the original youth hostel. I was a bit confused. The land was directly across the road, but we drove down to another street with half a dozen homes on it. Diane explained that land had been sold off over the years, perhaps when money was needed to pay the bills. At the end is a gate to unlock and then we took a drive across the open field continuing through the woods and suddenly in a small open area is the hostel building.

Everything remains the same. I saw the main building with the rooms that newspaper articles had mentioned: the kitchen (without running water), the dining and living room with the fireplace. Precarious steps led up to a loft where the bunkbeds for the girls had been located. A smaller building called the bunkhouse was reached by a short, covered walkway. One of the two outhouses remained and still is the only “toilet.” There was the original bonfire pit and the path down to the river. I felt as though I was stepping back in time.

This was a journey into the past from generation to generation. Walter and Esther, followed by two of their sons: Ned (Verna) and Paul (Eleanor), members of the second generation. Laura (Zander) Stoeger and Karl Zander, the children of Ned, and Diane, daughter of Paul are third generation. Karl continues harvesting the sap, processing it and bottling the maple syrup in the “sugar shack” across from the farmhouse. Diane’s son Eric Peterson and his wife Kate managed to purchase the land and cabin with the help of gifting from Diane and other family members. Their children are growing up loving the place and as the fifth generation will follow.

One thing was clear to me. Keeping this property in the family was of the utmost importance. By continuing the production of maple syrup at MapleAcres, saving the photos, letters and historical information, and holding on to the remaining 30 acres with the farmhouse and cabin, it is evident that the hostel will not be forgotten. The love of the land has been passed down from generation to generation. I left refreshed, happy and welcomed as the hostelers must have done for thirty-four years.