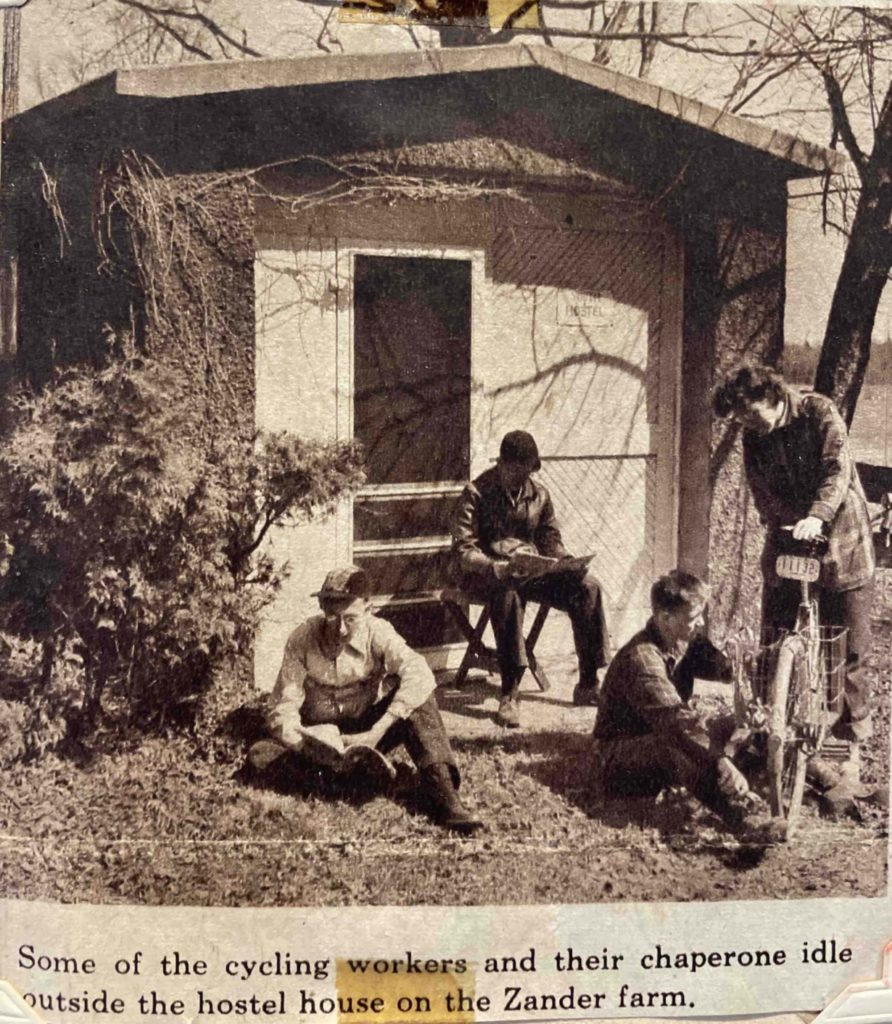 When I think of a youth hostel my memories go back to my college semester abroad. A hostel was a place where young travelers could stay cheaply with dormitory style arrangements. I was surprised to find Two Rivers had its own youth hostel. How did this happen?

The story starts with Walter Zander, age 22, purchasing a farm east of Eastwin in the Town of Two Rivers. Then in 1941, while his family was eating dinner, a knock was heard on the door. It was a field man for the American Youth Hostel organization saying the Zanders were recommended to start a youth hostel. Walter talked it over with his wife Esther and agreed to proceed. The nightly charge for hostelers would only be 35 cents. The hostelers would bring their own food and prepare it themselves. The Zanders decided to go ahead and start the first American Youth Hostel unit in the state of Wisconsin on their wooded property, three and a half miles north of Two Rivers.

The Rotary and Woman’s Clubs of Two Rivers sponsored and assisted in the building of the hostel. A stucco garage was made into the kitchen and dining room. Also, a small building in the “maple woods 40” was fixed up so the hostelers could sleep in it. The boys used this building and the girls slept on the large, enclosed porch attached to the home. Later, a nice building near the river on Zander land was put to use with a kitchen, dining room and large living room, with sleeping space for the girls upstairs. Another building was moved in and became the sleeping quarters for the boys.

On May 1, 1941, the hostel received its charter from the American Youth Hostels of Northfield, Massachusetts. On June 1, the first overnight guest was registered. During the first year there were 63 overnight guests. Three groups ranged from 9 to 12 individuals and guests were from nine different states. In 1942 the number of hostelers coming to Two Rivers almost doubled.

Interestingly, the original 1942 treasurer’s record book for the Woman’s Club showed many expenditures for the hostel. Items listed included bedspreads, a broom and dustpan, paint and cotton. Items came from Suettinger Hardware, pillowcases were purchased at Penney’s, and shades came from Kresge’s. Money was spent at Schmitt Lumber Company in September of 1944. The price of a stove was split between the Rotary Club and Woman’s Club in 1947. It is clear that the clubs continued to support the hostel.

The January 15, 1943, Two Rivers Reporter carried an article stating Mrs. Zander was a guest speaker at the Woman’s Club meeting. She told of the varied groups who have stopped at the Two Rivers hostel. They consisted of “school teachers, students, chemists, librarians, secretaries, housewives, newlyweds and a host of others representing almost every profession.” The hostel organization will “urge servicemen to use the hostels on short leaves and emphasize more weekend trips, trips by larger groups and family trips because of the difficulty of traveling by other means.” Perhaps the thought was bicycling, and walking could take the place of car travel with the mandatory rationing of gasoline, the need for rubber, and auto plants switching from cars to military vehicle production in 1942 due to the war.

Newspaper articles and books provide facts, but memories add some human interest. When I mentioned to my Mom that I was going to write this article, she again unexpectedly provided me with a story from her past. Audrey (Zuehl) Niquette said she was about 11 or 12 (thus it would have been about 1943 or 44) when she set out on an adventure with a few of her close friends. She joked that the parents might have wanted to get their daughters out of the house for a while. From their homes near the old Washington High School, they set out on their bicycles for an overnight stay at the youth hostel. They took the Old Tannery Road (Forest Avenue) to the north. She remembers turning where the Family Restaurant is today though she isn’t sure of the exact location. None of this was built up at the time and so much changes. She remembers continuing on and finally crossing the Tannery Road Bridge over the East Twin River. She couldn’t remember which side of the road the hostel was on, but it was close to the river. She doesn’t remember much about the adventure either, except that she got the top bunk and no sleep because she was tormented by mosquitoes the whole night. She said for a long time she has wanted to go for a ride and try to see where the hostel location might be.

This led me to attempt to figure out where Eastwin was located. It was spelled this way and it was implied that it was the name of a place. Of course, there is the East Twin River and a golf course called Eastwin. While researching I found information on Eastwin Brick and Tile Company and a cheese factory located there. Finally, I found a 1947 plat map which showed the location of the Zander’s farm.

The youth hostel continued to be featured in the newspaper. The hostel received awards and praise. Many local club meetings included presentations about the hostel. In the late summer sunshine of 1952, the Woman’s Club held an outdoor meeting at the farm and were given a tour. One article stated refreshments of cake and ice cream were served with maple syrup made on the Zander farm. In 1956 Mrs. Zander presented her annual report and stated they will be renting a river cottage to accommodate more guests when maple syrup season starts. Maple syrup is still being tapped to this year according to Laura Zander Stoeger. In speaking to her just recently, it appears the family has more information to share. How long did the hostel operate? What other information is available? Could there be more photos? A follow-up to this article certainly appears to be needed!